What Happens in Boracay (Reflect)

Home » Reflects » What Happens in Boracay

Single – the search is on!

I could clearly remember that my summer for the last six years since I reached 18 has not been so remarkable at all, because I mostly stayed at house. This time, I want to make something different this year and so I ask my college friends if we could go to Boracay – the beach capital of the Philippines. Little did I know that three of my girlfriends were all taken. Suffice to say, I was the odd one out. When we were in college, our circle was originally comprised of eight people. However, four of them were in the outer space. One was in USA and the other one was in Isabela, while the other two either do not want to be reached or cannot be reached.

The three girls and their boyfriends conspired to scout a man for me. This got me wanting to back out from the trip, because I’m the only single gal tagging along. But, of course, I can’t do that since I was the one who arranged our flight. I did not close my door for their so called “scouting”, yet I did not open it entirely, too. I mean, the whole thing had me feeling conscious every time they call my name when they lay their eyes on someone good-looking. Some friends! Haha.

Alone? Heck, this is what you call third-wheeling! IMO, it made me feel like I was the only one who bonded equally with all of them since I kept inserting myself while they were having their precious moments. Bwahaha!

Seven of us stayed in Boracay Coco Huts.

Patrick is working in one of the most prestigious hotels in Boracay and it was his birthday, so he invited his friend to come over with us. Since I’m the only single gal in the group, I ended up platonically paired with one of his guy friends. After eating, we arrived at the Epic Bar and the boys went gaga on the dance floor. The boys tried to pair me up with someone else, because the guy I was with seemed to have a hidden agenda. He was crossing the line. My friends surely wanted to keep me safe. The boys introduced me to one British guy and a few Koreans, yet I still fell from the hands of the first guy. This happened because: the British guy was snatched from me by an American girl and Koreans are gay! LMAO! The Koreans like our boys.

Anyway, I do not want to expound on what happened next, but it was 2 AM when we got to our hotel and it was where I was able to summon enough girl power. During times like this, your friends should have your back (just like what Barney Stinson said in How I met Your Mother) Don’t get me wrong, though, Patrick’s friend is nice sana.

This one costs P1,500 in exchange for an incredible up, up and away experience for 15 minutes. Fortunately, Hans and Caren were able to haggle, so we got it for P 1,250. However, whenever we were ready, there was no available space for us for two different days. When we were asked for the third time, we told them we will no longer parasail since it felt that it could be a sign that we should stay away from the activity and our excitement already waned.

Walk outs and distances seem to be the style of my friend’s LQs, but you know, it was good to have that kind of moment since everything that surrounded us are breathtaking. Isn’t that’s how we feel too when our emotions are high? I won’t elaborate what happened during their petty fights, because they might get furious at me. Peace, guys!

It’s the kind of restaurant where you would feel Filipinos are less treated. Mika, Patrick and I love their dishes even though they gave poor service.

It was our last day when I was alone shopping for some pasalubong. I was passing by a store when a vendor was trying to upsell something. What’s funny is that he was speaking to me in English. I didn’t mind this. However, I got the answer during my next stop. The salesman was trying to convince me to buy his products and he was also speaking to me in English. I asked him, “e eto magkano?” He then blurted, “ay nag-Tagalog si ma’am! Akala ko koreana.” I totally caught them off guard. Hahaha!

In D Talipapa, every restaurant offers paluto, because they are located near the wet market and the restaurant we dined in was packed with customers. The dishes in Angel Wish Dish were all delicious and the servings are enormous. However, their service is poor. When we were billing out, we were quite shocked since we were undercharged and we later learned that the bill we were given was for another table. When our true bill arrived, we were overcharged. The cashier explained that the price has changed, and the attached price (P 1,250) was removed by the customers leading us to see their previous price (P 950) instead. My friend said, “Why you should blame the customers? (when it should be your responsibility to monitor your menu). With that, we got crazy over the bill. A waiter handed a change which isn’t for us. While the customer from the other table waited for his change. Everything was screwed up. The last bill showed that they have service charge, but this was not stated on their menu (it’s SOP for a restaurant to declare in their menu that they have service charge). We paid for P2,000+ and the service charge was worth P200. This does not sound legit to us at all.

Flight! To Fly or Not?

Our flight back to Manila was scheduled at 6:10 PM, but something legendary happened again. After lunch, we went back to our hotel until Drew found out that his wallet was gone (he almost paid the entire bill for our D’Talipapa lunch, and now this?) So, we went to D Talipapa again. We had to use our time wisely since the travel from Boracay to Kalibo Airport would eat up 2 and a half hours. From the original P200 fare for the van, we paid P400 each, so that the driver may proceed to the airport and it was a good thing he picked up his speed. Bhing paid for me P200 because I already ran out of cash and I forgot my ATM in Manila. We arrived 5:30 at the airport. The ground passenger assistant said that it was our boarding time. We were lucky that our flight was delayed for 10 minutes. After that, we got to sit back, relax, and glance at the window to marvel the contrasting dark nimbus clouds and orange horizon.

What happens in Boracay, is bound to be told. 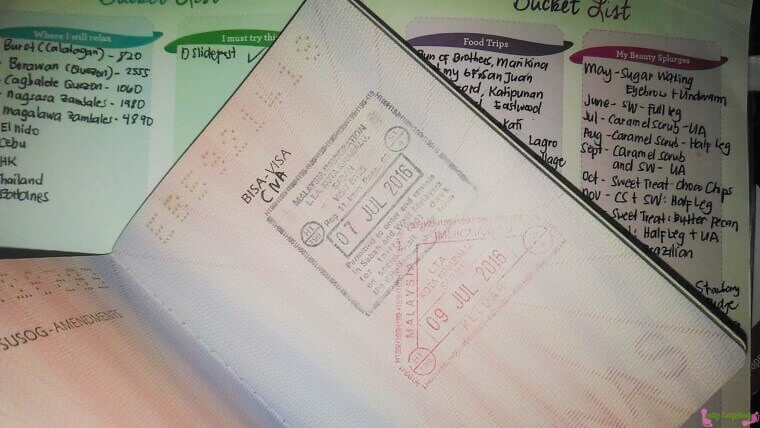 Do you know what first-time experiences impose? It’s fear and excitement. My provinces are in […]